Keep your members up to date on your blog.


Here is what is coming up in Merced/Atwater during the next couple of weeks in our area. Please read the attachment about who and what will be on the June primary ballot; we need to vet these people and find out as much as we can about them so we can educate ourselves and others. There is also an attached letter regarding voter fraud from a group in San Joaquin county of special interst to us all. FYI, Pizza plus Fun is under new management and the meeting area is under seperate management. We will almost certainly be responsible for setting up tables, cleaning up, and putting everything away at the end of the meeting, so I hope I can consder every one of you a volunteer!

I look forward seeing everyone next week.

Guest Speaker Rex Ruth, he will be speaking on the State Constitution and how the Latino Community helped write our state constitutions.
more info: http://www.facebook.com/?ref=logo#!/events/166067436808458/

Jan. 19th Merced/Atwater Monthly Meeting
Pizza plus Fun 6:30 -8:30 Winton, CA
Guest speakers Brian Weyland, candidate for our new 16th Congressional District, running against Jim Costa as Dennis Cardoza steps aside; also Stuart Dodge from NorCal TPP will rev us up on how to get the Tea Party word out and what is happening with upcoming staewide elections. We will also have committee updates on Election Integrity, Agenda 21, local city councils, etc. This will be a full meeting. FYI, Pizza plus Fun is under new management so things might be a bit differant. We will need you help to set up and take down the meeting area.

Guest Speaker: Carey James retied Border Control Agent. Speaking on why our Borders should be closed.

Feb 2 Los Banos Monthly Meeting
Miller & Lux Building at 7:00pm
Linda Paine of the California Election Integrity Project will be here to speak on Voter Fraud, and how we can work together to minimize the problems. remember, a group of Progressives say: "The only way we can win is to cheat", so minimizing the cheating makes sure that your vote truly counts. Learn what you can do to make sure that our votes really do count.

Streaming video of city council meetings now available
Hello All,
My video crew does the broadcasts of both the Atwater and Merced Council meetings. I know that some people cannot attend the meetings, and some folks don't subscribe to Comcast to view the broadcast, so this week, January 9th, I am streaming the meeting via a program called Livestream. This means anyone with a good Internet connection can view the meeting.

This is our first test of this streaming technology. We hope it works as expected. Thank you,
Jim Sanders
Merced Community Action Network

The banking crises was caused by Bill Clinton, Chris Dodd and Barney Franks, they are the politicians  at the heart of the sickness which is weakening this country. Bill Clinton, came up with his "National Homeownership Strategy  that lowering of the housing loan regulation created a perfect opportunity for the loan industry to rake in billions of dollars, they bundled loans and sold them to unsuspecting buyer around the world.  Chris Dodd’s case, go back and look at the Countryside deals,  Barney Frank’s case, go back and the lobbyists he was close to at Freddie Mac. Who ever wants to go after the business community ought to start to go after the politicians who have been at the heart of the sickness which is weakening this country. Its well documented, ever since George W. Bush came to power in 2000 he pointed out the need for a reform of the laws that govern SEC and Wall Street oversight. Their insistence on oversight reform of our financial institutions and markets has been consistent, loud and ignored. Chris Dodd and Barney Frank clamed the housing market was sound there was no need to tighten loan regulations.
Suddenly the Federal Reserve Chairman Ben Bernanke issued a warning about the U.S. economic  condition.  The housing market turned upside down people were losing their jobs and defaulting on their loans. Ben Bernanke and House members of the U.S. Senate Committee on Finance were recommending immediate action to stimulate the economy. BEN BERNANKE, Federal Reserve: It's particularly important now that the economy is close -- the recovery is close to faltering, we need to make sure that the recovery continues and doesn't drop back, and that unemployment rate continues to fall downward. Bush hoped their plan would provide an "effective, robust, and temporary set of incentives that will boost our economy and encourage job creation.
http://www.youtube.com/watch?v=BLICtNcQ5UY&feature=player_embedded
http://www.theonion.com/articles/drunken-ben-bernanke-tells-everyone-at-neighborhoo,21059/ 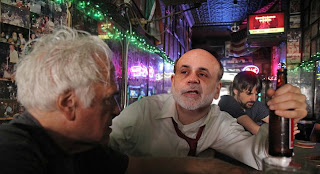 President Obama pressed aggressively for his massive economic recovery plan (Jan 25, 2009), laying out the most detailed benchmarks to date of a stimulus package that would cost at least $820 billion and warning that the nation's economy could become dramatically worse without major federal investment.
Obama in January 2009, described what he would do with a recovery package aimed at saving or creating as many as 4 million jobs.  Republicans who have resisted the scale of federal spending, as well as to average taxpayers, many hit hard by the recession, who have not felt the benefit of earlier government bailouts.  Obama said his American Recovery and Reinvestment Plan is critical to jump-starting the economy,  The plan, he said, would protect workers from losing health-care coverage; modernize public schools, roads and sewer systems; lower energy costs and lower taxes; and make college more affordable. The president, who met with his chief economic advisers,  visited Capitol Hill to court Republican leaders, and top administration officials will fan out on political talk shows to press their case.  "In short, if we do not act boldly and swiftly, a bad situation could become dramatically worse." Some congressional Republicans remain opposed to his stimulus plan, saying it includes too many spending programs that may not provide any economic relief and arguing that we need tax breaks.
"Unfortunately, the trillion-dollar spending plan authored by congressional Democrats is chock full of government programs and projects, most of which won't provide immediate relief to banks," House Republican Leader John A. Boehner (Ohio) said  in his January 2009 party's response address.  Boehner spokeswoman Antonia Ferrier described the White House proposal as "just another unfocused, runaway bill loaded with slow and wasteful Washington spending on every conceivable goal." Boehner criticized some spending proposals in the House Democratic plan, including $6 billion for colleges and universities, many of which have large endowments, and $50 million for the National Endowment for the Arts. "All told, the plan would spend a whopping $275,000 in taxpayer dollars for every new job it aims to create, saddling each and every household with $6,700 in additional debt," he said.
The White House released a four-page report dated in January 2009 outlining spending priorities and accountability measures for the recovery package. Obama wants to double renewable energy capacity within three years, creating enough additional capacity to power 6 million homes, and he plans to leverage $100 billion to finance private-sector clean-energy initiatives. We don't know what happened to Solyndra's stimulus money, they were never able to get their manufacturing costs low enough to be competitive with solar panel manufacturers in China, as well as solar manufacturer companies here in the United States. They were three times more expensive for their modules than competitors and now bankrupt.  Fiscal Responsibility not. Constitutionally Limited Government not. Free Markets not.
Do the Wall Street Protesters know what they are talking about? Do the Protesters and Tea Party Patriots agree on any of the issues? Does their OFFICIAL List of Demands have anything to do with the financial crises or is it just organized useful idiots taking our attention away from Obama's failure so we would pay attention to his socialist ideology and how it has failed. The spin misters are at work demonizing, distracting, and trying to change history by filling the useful idiots  minds full of mush and telling them that they are victims. Just compare at the Wall Street Protesters Official List of Demands and the Tea Party Patriots.
The tea party, meanwhile, was a spontaneous, organic and fast-moving movement, but it has maintained a cogent message: a demand for fiscal responsibility in government. Tea party rallies have always been safe and clean.  Unlike in New York, we can find no reports of tea partiers being arrested, individually or en masse, at the thousands of tea parties across the country with millions of attendees that have taken place for years now.  They are not lawbreakers, they don't hate the police, they don't even litter.  A quick glance at the TV reveals the sharp contrast posed by the Wall Street occupiers.
Contrast, those occupying Wall Street and other, when they are intelligible, want less of what made America great and more of what is damaging to America: a bigger, more powerful government to take from other citizens and allow the government to come in and take care of them so they don't have to work like the rest of us who pay our bills.
Yet the Leftist media cheers for a group of lawbreaking troublemakers who occupied a park in New York, blocked the Brooklyn Bridge, were arrested by the hundreds and treated law enforcement with disrespect and disdain all while trying to tear down the foundations of the greatest nation on earth.
The media is trying to say the Wall Street protester are the same as the Tea Party Patriots. Such a media response is expected.  But when you compare these people with tea partiers' now you've got a problem with We the People.
<turlockpatriots@gmail.com>
Posted by North Valley Tea Party Patriots at 11:32 AM No comments: